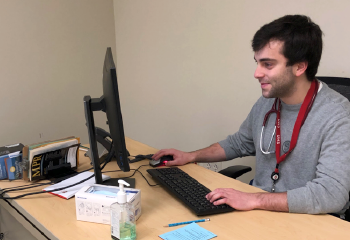 "Environmental changes are only going to increase and become more pronounced – affecting more areas, more people overall. We must change our behaviors in our daily life and opt for choices that are more environmentally friendly."

Philip Pape first learned about global warming from Al Gore’s “An Inconvenient Truth” in 2006 – but unlike many who were inspired by the film, Pape was only 10 years old. His early understanding of interconnectedness and innate desire to develop strong relationships with others spurred his decision to study nursing and psychology at the University of Wisconsin-Madison.

During his undergraduate studies, Pape gained meaningful insight on how the environment affects human health during a public health rotation at a rural Wisconsin county health department. A simple environmental inspection opened his eyes to the connection between environmental health and primary care, and he suddenly “understood the cycle,” he said.

“I realized how the environment, our behaviors, and our health all intertwine and influence each other in so many positive and negative ways,” he explained.

After that experience, Pape started asking his patients, “Where do you live? What outside activities are you doing? Is your infrastructure sufficient? What is the environment around you? Is it making you sick or impacting your health?”

When he began having these discussions, he noticed it can be “tricky to tell people to go out of their way to do environmental work – especially when it’s not included in their full-time job.” But he does not feel these challenges are an excuse for inaction. “I am afraid environmental changes are only going to increase and become more pronounced – affecting more areas, more people overall,” Pape said.

Given this concern, he began to seek a deeper understanding of how the environment and climate change impact human health. He discovered the Nurses Climate Challenge, sponsored by the Alliance of Nurses for Healthy Environments and Health Care Without Harm, through Dr. Jessica LeClair, another nurse climate champion. LeClair uses Nurses Climate Challenge resources in her social justice and global health class at the University of Wisconsin-Madison. Pape was “immediately interested” in the challenge and found the goal of educating 5,000 health professionals “extremely achievable.”

Since discovering the challenge, Pape has used resources to educate public health nurses at a Wisconsin county health department, nurses at the primary care clinic where he serves as a student medical assistant, and friends in nursing school. His approach to climate and health education has ranged from one-on-one conversations to small presentations, drawing on his psychology background to bolster these discussions.

While Pape “relies largely on the evidence” to illustrate the connection between climate change and health, he also aims to meet his audience where they are, seeking to understand “how they see the world” in order to tailor his approach. So far he’s encountered “no push back,” he said. His audience has been particularly compelled by the greenhouse gas impact of anesthetic gases and the amount of waste created in hospitals.

The Nurses Climate Challenge has inspired Pape and those around him to be creative about alternative ways to reduce waste. While he has had success as a nursing student, Pape feels the real challenge of serving as a climate champion will be far greater. Beyond knowledge or behavior, Pape believes that the largest climate issue for generations to come will be “within ourselves.”

“We must change our behaviors in our daily life and opt for choices that are more environmentally friendly,” he explained.

Join Pape and other climate champions in the Nurses Climate Challenge, or share this opportunity with your colleagues today. “It’s a domino effect,” Pape said. “We’re spreading a good virus – a thoughtful one. It’s an idea.”

Philip Pape will graduate from the University of Wisconsin-Madison in May with a double major in nursing and psychology. He attributes his focus on social justice to his parents, who have “shown me the world in ways I would have never been able to see on my own.” Pape likes to give hugs, and he has tried kombucha only once but thought it tasted “healthy and interesting.”