From hospitals to homes: Nurse encourages a climate-smart future 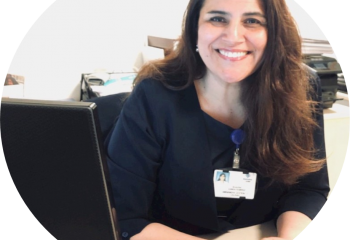 Born and raised in Santiago, Chile, Claudia Zúñiga always had a passion for serving others. “Without a doubt,” she says, the best way to serve others was as a nurse. After university, Zúñiga worked in a maternity unit assisting with childbirth and postpartum care. From there, she moved to the neonatal intensive care unit (NICU), first as a nurse before she took a position as the NICU nurse manager. It was a great new challenge on a personal and professional level, but she was ready for more.

In 2012, Zúñiga was appointed as Clínica Alemana de Santiago’s, a 450-bed hospital in Santiago, Chile, quality management nurse of the department of nursing. The position had her working closely with the director of nursing, Maritza Navea, as they established new processes and projects to unify the team.

An important component of Zúñiga’s vision to unite the nursing team was to raise awareness of climate change and environmental health in their clinical practices, at home, and in the community. She began to realize how much this issue was important as Clínica Alemana began to see more patients in the emergency room with climate-related health issues, such as dehydration and sunburns, among others.

Zúñiga’s awareness of the climate crisis and its impact on health grew as the UN Climate Change Conference (COP 25) was scheduled to take place in Chile in December 2019.

“Television campaigns addressed the issue [COP 25] continuously. Due to the incidents in Chile, COP 25 had to change its geographical location, however, in its virtual passage through Chile, it has already developed consciously in a lot of people – especially in me and my team,” she says.

Zúñiga also couldn’t ignore the health sector’s contribution to the climate crisis, “we use a lot of energy, gas, water. We are generators of tons of garbage, in addition to the large generation of waste in surgical rooms.”

With Zúñiga’s leadership, the entire nursing department at Clínica Alemana joined the Nurses Climate Challenge. They translated the materials into Spanish and asked colleagues for input to address climate-smart solutions across the entire health care facility.

“This Challenge belongs to everyone, not just one group. Given that health centers are ‘big pollutants,’ the actions generated from them will be a great contribution to face this challenge of climate change,” she says.

Zúñiga has trained 1,400 health professionals at Clínica Alemana, along with others who have attended public educational events.

“Most of the people have had an excellent reception to this topic. The most valuable thing is to see how many of them have taken this challenge very seriously, achieving changes in their homes and social environments,” she says. “The impact goes beyond Clínica Alemana. It generates a real change.”

Inspired by the changes her colleagues were making at home, Zúñiga created a private Instagram group where people can share their home improvements to recycle, reduce, and reuse. She also got her 6-year-old son involved, asking him to develop tasks at home to reduce her family’s environmental footprint.

Zúñiga and the nurses at Clínica Alemana know that their work must reach beyond the organization’s walls – it is essential that their colleagues, family, and friends understand the health impacts of a changing climate and make changes to ensure a healthier future for all.

“The effort must belong to everyone in the world. We are all responsible for contributing to actions that mitigate climate change.”